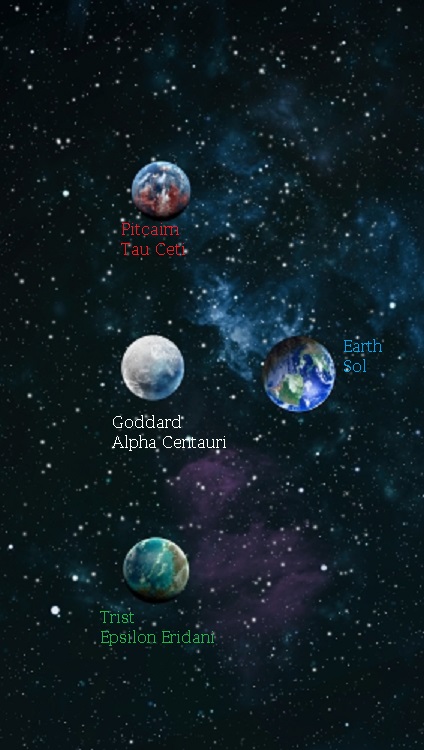 By the late twenty-first century, there were thousands of known planets in the galaxy, many of them nearby and often in promising orbits. Telescopes couldn’t do more than tell scientists that a planet could have liquid water and therefore could possibly support life. So, they sent the probes, tiny automated spacecraft powered by ion engines. These ships exhausted their fuel accelerating to speeds never before attained, zipped through their target star system, and used the star to whip them back on a course to Earth, sending their data ahead of them. In the space of a few decades, Earth learned about three planets around three nearby stars, all of which harbored primitive life.

With no sentient life of their own, these were planets ripe for the taking, so the colony ships followed the probes. They were huge ships, driven to near-light speed by the new Stenhouse drive, each carrying more than a hundred colonists. The voyage to Alpha Centauri took a grueling five years, but Tau Ceti and Epsilon Eridani, each about twelve light years from Earth, were much harder on the colonists. By the start of the twenty-second century, however, all three colonies were established.

Two hundred years later, the Epsilon Eridani and Alpha Centauri colonies struggled on planets that were marginally fit for mankind. The Tau Ceti colony fared better. Despite receiving new colonists and supplies only every twenty-years, it grew and even thrived, a quiet planet where a few thousand people could live in peace.

A new supply ship is coming to Tau Ceti. The colonists eagerly prepare for another rare contact with the mother world, but they have questions, too. This ship is different, and that difference will change their world in many ways. It all began with “A Ship from Earth."

Three library ships were built: Asimov, sent to Tau Ceti; Capek, sent to Epsilon Eridani; and Lang, sent to Alpha Centauri. More information is available by clicking on the Details button below, but this page contains spoilers, so be warned.